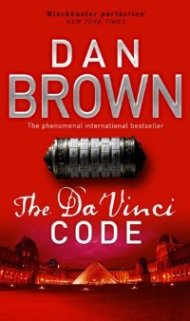 The Da Vinci Code is a fast- paced thriller set in modern day times. Robert Langdon, a famous symbologyst, has agreed to meet the director of the Louvre to discuss a controversial issue on the importance of the female figure in ancient cultures and religions . Everything will change when the director is found murdered with an ancient symbol carved on his chest. As all evidence points  to Robert, he is forced to escape only to be plunged into a series of events he could never have imagined and the quest for the Holy Grail itself. He will not be on his own, Robert and the good looking French cryptologist Sophie Neveu, the director´s niece, will work together to uncover the truth and defend it from those who wish to conceal it. Treason, secret orders, assassins, car chases, pagan rituals, conspiracies our some of the ingredients of this novel, that tells about a secret hidden for centuries guarded by the Priory of Sion.

This absolutely gripping thriller set in Paris and London is a brilliantly well written book that you won’t be able to put down. The great strength of this book is mainly how Dan Brown combines ancient secrets and modern day threats, all of this joined together in this page turning blockbuster. Usually thrillers are too violent and gruesome making them unsuitable for young readers, but not this one. It has an intelligent and terribly clever plot that will not let you down. I loved how the chapters would always leave you on the edge of your seat.

My only criticism is that sometimes the author takes too long to explain things because he uses very short chapters changing from one character´s point of view to another´s.

RECOMMENDATION: I recommend it for readers aged 12 and over, including adults and particularly for those with an interest in history. It will not disappoint.